Can curry cause hallucinations?

We attended the Burmese Friendship Association Curry Night at Ermington and had a great evening. The answer to my question in the title of this blog is – yes it can - read on!

After an introduction from Dr Malia of the Burmese Friendship Assoc, Zoe from Burma Campaign Australia gave an insightful speech about the importance of not loosing focus on human rights issues in Burma. She emphasised that while there may be a lot of positive signs coming from politicians in Burma there are still a lot of issues that need attention.

Zoe also suggested that while Aung San Suu Kyi’s NLD party only holds 6% of seats in Burma the “civilian government” are happy to promote feelings of unity and well being, but how will they react after next election when the NLD may take 50% or more of the seats in parliament?

If you see a sign stating “Tomato Sauce Burmese – Very Hot” you should believed it. If the hosts are warning you about the sauce it is guaranteed to be more than just hot and it was. I noticed every Anglo Aussie who tried it had just a little speck on their spoon and then decided to leave it alone.

The curries on offer were fantastic, goat meat; beef, chicken, seafood and vegetarian varieties were on offer. Plus, pickled vegetables, rice and mohinga (fish soup as a starter). All home cooked and full of flavour. I love a good goat meat curry, and the one on offer was delicious. You have to be careful of the bones, but the taste of a good serving of goat is amazing. 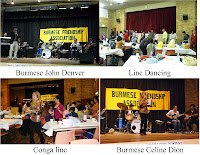 This was when I started hallucinating …

Have you ever seen Burmese line dancing? Was it the tomato sauce or was I really seeing the Burmese John Denver singing “Country roads, take me home. To the place I belong, West Virginia, Mountain Mama Take me home, country roads”. I had to wonder when the Mountains of West Virginia moved to the outskirts of Yangon.

The fun continued when anyone who thought they could sing took to the stage and had go … we heard “Proud Mary” sung by the Burmese John Fogarty, “Fernando” by the Burmese ABBA, and the list went on.

Lorenza and I loved it – these people did not care about anything but having some fun. It was infectious – who could not enjoy themselves in the midst of such a fun and friendly bunch of people. I started believing John Denver really was Burmese!

Was the door prize rigged?

Another fun part of the night was the draw of the lucky door prizes and raffle tickets. The people at the table next to us must be the luckiest family alive – every person at the table won a prize – next time I am sitting with them!

The raffle and door prizes was fun – they made sure lots of people got a small prize which made everyone feel included. I was really touched when some of the people we shared our table with gave their prize away to a kid who had not won anything. It put a smile on the young boys face and made everyone feel warm and fuzzy.

Three beautiful young ladies performed some traditional Burmese dances. They told a story in the dance which I must admit I did not really follow. That aside their costumes and dancing were lovely.

You can tell from the photo of the line up for dessert that the offerings were delicious. After everyone had tasted the pastries, etc there was more serious dancing done – the Chicken dance, the Macarena, the Bunny Hop, the Hokey Pokey and all those favourite party dances were encouraged plus a conga line through the tables – hell after a good curry why not have some fun!