I got a surprise gift today from some people I have never met!

Clients of my wife recently travelled to China and one of the places they visited was the Potala - the Holy Palace in the Snow Land - the temple/palace of the Dala Lama's (well maybe not the current 14th Dala Lama who has been exiled from China).

It was such a lovely surprise, the book has a huge number of gorgeous colour prints inside and I was so impressed by their kindness in thinking of me.
Posted by Rob Blue at 20:12 No comments:

Email ThisBlogThis!Share to TwitterShare to FacebookShare to Pinterest
Labels: Buddhism 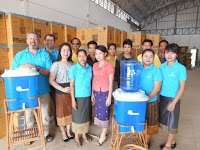 Kiva small loans are a great way to help fund projects and individuals in developing countries. It is a simple idea, lend $25 to someone starting a project and over time they repay you (and the group of lenders who also participated) and you re-lend to new projects. Pretty simple. You can find Kiva via this link.

The latest loan we made was to a project in Laos providing clean drinking water. In Laos, nearly half of the population lacks access to safe drinking water, causing widespread waterborne illness.

TerraClear is a social enterprise with the mission to increase access to safe drinking water, especially in remote households.

Since 2010, TerraClear has been locally manufacturing ceramic water filters, which provide effective and long-term household access to clean water.

TerraClear's success has been built on promoting an affordable and easy to use product with an innovative design. TerraClear became a Kiva Field partner at the beginning of the year to increase its outreach and provide these water filters to its end users. Ceramic Water Filters have helped over 40,000 families to access clean water in Laos.

Currently, TerraClear is scaling up production and delivery to more remote areas. To achieve this, Kiva has partnered with Nexus Carbon for Development to provide a loan of $24,000 to TerraClear to purchase a second delivery truck to service remote households of Laos with safe drinking water. TerraClear recently purchased its first new truck – made possible by the generous support of the Kiva community – which is already helping to bring clean, safe drinking water to over 500 people across rural Laos every week.

The second truck will allow TerraClear to transport 120-130 water filter sets per trip, which will reduce the number of trips from the provinces back to the distribution center. This will dramatically increase the number of filters reaching households every week.

As TerraClear is scaling-up, this investment will require some time to produce returns. The loan has been structured with two repayment dates with the expectation that lenders could get paid back earlier if TerraClear produces results quicker than anticipated.

(Info on TerraClear from Kiva website)
Posted by Rob Blue at 09:50 No comments:

The Greater Sydney area is a huge melting pot of cultures. We stumbled across a cafe in Smithfield called "My Yerba Mate" which serves great latin food and also specialises in the drink "Yerba Mate". I had never heard of it before. It is a tea/coffee like drink made from a plant in the holly family and a traditional beverage in a lot of South American countries.

I was really surprised by the taste, they made me a "mocca" style version and it had a strong flavour halfway between tea and coffee, it had a lot of body to it. Lorenza had a "latte" style and it was not as strong, I preferred the version I had. The owner of the cafe has done a lot of research into the beneficial effects of Yerba Mate and was very passionate about it. Here is a link to some info on Wikipedia. They sell 36 different varieties.

My Yerba Mate is at 895 Horsley Drive, Smithfield. They are next door to my favourite shop in Sydney - the Cooperage wine making shop.
Posted by Rob Blue at 09:41 No comments:

We were travelling back from Myanmar, via Kuala Lumpur in 2013. We grabbed a sandwich at an airport cafe and got talking to the guy who served us. He was a very modest Shan refugee from Myanmar, who lived in a refugee camp and had a work permit for some part time employment. He was married and had one child. His wife was still living Myanmar with their child.

Sang, told us about his life and the hardship he and his family faced in Myanmar. His years living in the refugee camp were difficult also, his wife had lived there with him until just after the birth of their baby, but she decided to go back home to family with the child for a time. They planned this to be just a brief time apart, but it turned into 3 years.

Both Sang and his wife had registered with the UN as refugees and had applied to be resettled in the USA. In 2013 he told us it may take a few years to happen, but they were willing to sacrifice living apart a few years for a longer term goal.

Social media can be a great thing, we connected via the mystery of the Internet with Sang before leaving. Now and then I have sent him a message asking Sang how things are going and he has replied in English the best he can.

Today, out of the blue I got this message "hello Robert how are you and your wife. My wife, our child and I are now in Texas". We wish them the best of luck and hope we hear how they progress with this huge change in their lives - may they always be well and happy.
Posted by Rob Blue at 22:10 No comments: